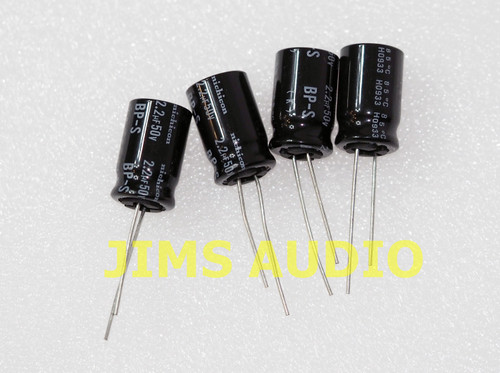 BP-S capacitors represent Nichicon's highest performance in capacitor for audiophile application. These capacitors are already out of production.

Although these capacitors were positioned by Nichicon as crossover capacitors in speaker crossover network, we found them extremely good to be used as audio coupling in amplifier circuits. Many users have tried to use two BP-S in a super-E-cap configuration ( based on Black Gate white paper) to give superb performance. In our own test, the tangent loss of BP-S capacitors is uncommonly low compare to other class of audio electrolytic capacitors at 20KHz. In addition, its low ESR allows it to outperform some MKP caps at high frequency side ( up to 100KHz). This can explain the excellent HF performance of BP-S. All users feedback the HF performance as open and very natural. Technically this is a reflection of low distortion.
Dimension : 12mm(d) x 20mm(h) ; lead pitch 5mm